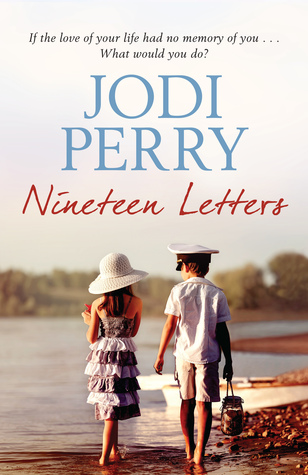 Braxton and Jemma have known each other since they were seven and six, ever since Jemma moved next door to Braxton. They have been best-friends ever since. Nineteen is a special number for the couple, they met on the 19th and exactly nineteen years later they get married. But a couple of weeks into the marriage, Jemma is in a car accident and when she wakes up, she has lost her memory and doesn’t remember Braxton.

“She may no longer remember the love we share, or everything we’ve been through together, but I do. Every moment … every second. I carry enough love for both of us.”

Braxton is determined to make Jemma remember him and their life together. He is always there for her and remains a strength to Jemma in this tough time. Braxton, wanting Jemma to understand their relationship and the love they have for each other, he writes her nineteen letters. Beginning with when they first meet as children, notable times in their adolescence and the forming of their relationship- leading up to her accident.

“If I loved him as much as everyone says I did, wouldn’t my heart still feel it?”

What can I say about Braxton, he is kind, never gives up, and has an unwavering love for Jemma. These two are soulmates (if such a thing exists) as they were meant to be together. Their relationship is so special.

“This is our second chance at love. Our happily ever after.”

This book was emotional, it was sad (although not too much) but there were many laughs to be had as well. The book was pure romance and I loved how the story was about Braxton and Jemma’s relationship. There wasn’t any unnecessary angst or drama, just love in its purest form.

Overall it was such a beautiful read and I really enjoyed it. I also really liked that it was set in Australia as it always nice reading a book about home.