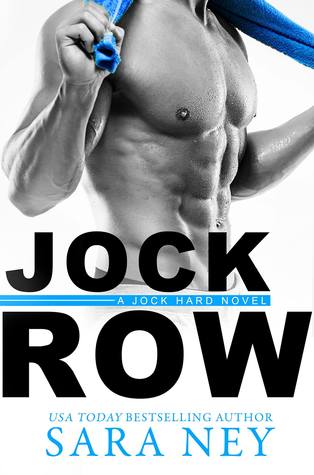 This book was so freaking CUTE! It was adorable and really made me smile and one of those feel good stories. What starts out as an unlikely friendship turns into something much more.

Scarlett, recovering from a cold and would much rather stay at home and watch Netflix but instead she is dragged to a party on Jock Row  by a couple of her friends. However, during this party she is labeled a “cockblocker’ by a couple of the guys. Rowdy Wade, the captain of the baseball team has the unfortunate pleasure of having to kick her out of the party.

Rowdy and Scarlett end up talking the rest of the on the porch and getting to know each other. They end up making hanging out on the porch a Friday night ritual. Scarlett tries to attend the party but Rowdy doesn’t let her in, instead they play games, eat food and get to know each other better. However, they don’t seem to mind that they are missing the party and end up having a much better time.

Rowdy starts to become enamored of Scarlett and really enjoys her company, being much different to other girls. Rowdy starts to make the move on Scarlett but this is something that Scarlett doesn’t anticipate. But Rowdy is determined to win her heart.

This book was hard to put down. I loved the banter between Rowdy and Scarlett and seeing the chemistry and relationship grow between these two. This book was utterly delightful and super sweet and sometimes steamy. I can’t wait to read the rest of the books in this series. Loved it!