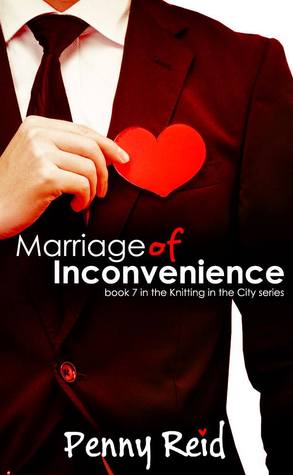 I have been waiting for Dan and Kat’s story from the beginning of the Knitting in the City series. This has been such an anticipated book for me and it didn’t disappoint.

Kat is in a bit of a bind. Her Cousin is trying to take over her family’s company by having her committed. To avoid that, her best option is to get married as soon as possible. But who could she ask. Dan the Security Man of course. Dan is willing to help out with her problem.

There is a lot going on in this book and is the biggest in the series but you fly through those pages. Although Dan and Kat are married, she still needs to sort out things with her family. But there is that undeniable attraction between the two.

Once some misunderstandings are cleared up between them, it becomes obvious there is something more than just a fake marriage between them and it could turn into something real.

I loved catching up with the rest of the crew and furthering along there stories as well. Penny Reid writes smart so the book is filled with interesting facts and endearing characters that you can’t help but love.