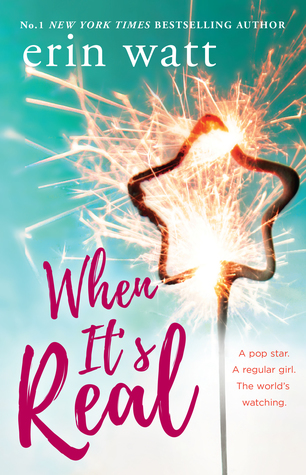 Oakley Ford comes from Hollywood royalty and a celebrity in his own right but he is having some writers block for his new music album. His manager Jim gets an idea that he needs to start ‘fake’ dating a ‘normal’ girl as a way to improve his image.

Vaughn Bennett finished high school early and is now working as a waitress to help support her family (older sister Paisley and twin 12 year old brothers Spencer and Shane) after her parent’s death. Paisley works at Diamond Management and her boss happens to be Jim’s brother.

Everything comes together and Vaughn is convinced (quite reluctantly) to start ‘fake’ dating Oakley. Dating Oakley puts her in a great financial situation even though she already has a boyfriend W (there’s no reason to worry about him as he is a bit of a douche).

Oakley (or Oak) start seeing each other and at the beginning that don’t quite get along but they all so have so much going on in their lives. But of course, as the two spend more time together real feelings start to develop. So what starts out as a fake relationship turns into something very real.

Oakley is becoming more grounded and sees that he needs to grow up if he wants to be taken seriously, especially with his music as he tries to catch the eye of the best producer. Spending time with Oak, Vaughn comes to the understanding that she no longer wants to be afraid of life and works to pursuing a job she is passionate about (although she is still figuring out what this is).

Oakley and Vaughn learn so much from each other and I really enjoyed watching their relationship grow. Of course when you’re dating a celebrity it comes with a lot of media attention and some people have their own agendas.

Overall I really enjoyed this story. This story definitely has a different vibe than the Paper Princess series, as it was lot more light hearted and fun. I look forward to reading more from this writing duo.