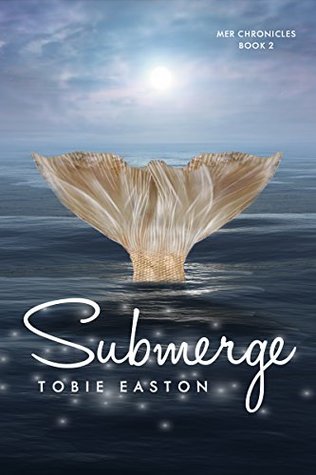 I really enjoyed Emerge and was excited when I was given an opportunity to read an ARC of its sequel. I was not disappointed and I enjoyed this book a lot more than the first. You dive right into Lia’s world of mermaids and romance and so much more in between.

Submerge starts where the first book ended. The trial is about to start and the entire mermaid race is thrilled with the return of their immortality. Lia and Clay are still discovering and building upon their relationship and finding out new things about Mer and Men.

However just as things are looking up for the pair, things take a surprising turn that leaves some devastating effects. This book definitely builds upon the Mer world and you get to see both Mermaids on land and in the sea. Lia’s way of life is very interesting and it was great learning more about her culture. she has a lot of adjusting to do when she finds herself having to live in the ocean. Lia’s character grows throughout the story and she really matures, especially after having to deal with everything that is going on.

Clay and Lia care very much for each other and go to great lengths to find their way back to each other after they a forced to separate. I really loved their reunion but there was so much happening in the story so the main focus wasn’t always on their relationship.

“But I can’t control the sun either. I may be immortal now, but I have no true power over time. All I can do is squeeze Clay’s hand and feel his fingers interlace with mine.”

There were many twists and turns in this story that I never saw coming and their was a very nice build up that lead to the conclusion of the book. I am very excited where the story goes next especially after the bomb that was dropped at the end.

I don’t often read YA and although the book sometimes felt a little young for me, it was a very enjoyable read and something different to what I usually read. I love the reference to ‘The Little Mermaid’ as it is one of my favourite Disney stories and have been interested in reading more mermaid stories lately (I think I would like to read an adult mermaid book next though).