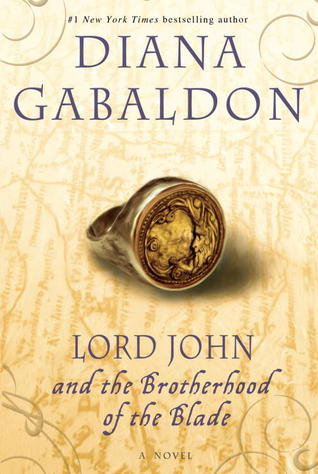 Title: Lord John and the Brotherhood of the Blade

This story joins Lord John on a journey through finding out more about a scandalous family history, a love affair with potentially disastrous consequences all during a time of war. Seventeen years earlier, Lord John’s late father, the Duke of Pardloe, was found dead, a pistol in his hand and was accused of being a Jacobite agent.

Now, pages from his late father’s diary are mysteriously turning up to members of the family presenting a potential threat for danger. As a way to find out more about these accusations, Grey turns to James Fraser, the convicted Scottish Jacobite. However, Jamie has his own secrets that he is unwilling to share but he may hold the key that will solve the mystery and clear his fathers name thus restoring the family’s honor.

Meanwhile, his mother is to remarry thus providing Grey with a new step-brother, Percy. The two become romantically entangled, but feelings become complicated and things are not always as hey seem. Lord John is a fascinating character and Gabaldon gives a rich history of military life and of a life of a gay man in the 18th Century.